Bushbuck in the Orange Grove

As told by Ron H.

It was midafternoon on day six of a seven-day trip. The sun was nose diving towards the horizon, which meant it would be pitch black in a couple of hours. What to do? We headed back to base camp for something cold to drink – our cooler was used up and it was hot! We were after all, on Africa time.
The day had begun with the usual big breakfast, then into the trucks. I was paired-up with Jim, who was after a Nyala, so that was item one on our agenda. We had to drive about 45 minutes to another concession where Christo had located an animal with the hourglass shaped horns Jim desired. Not too terribly long after arriving, we located an Nyala with well-defined curving horns, and the stalk was on. Jim made the shot, the Nyala was down, and the photographing began. Looking at Jim’s animal, I believe Nyala have to be one of the most beautiful creatures in Africa and this one was terrific!
While the skinners began removing the hide for a full mount, we moved about a quarter mile away and built a fire in the shade of some large ancient trees. Christo produced four large steaks, lots of sausage, and a bag of rolls out of the cooler, and soon we had a lunch fit for a king!  Just as we finished eating, the skinners finished their task. So while they ate, we loaded the truck with some additional skins and heads for transport back to the salt bins on Christo’s property. By the time that chore was completed, we were near camp, and it was midafternoon.

I still wanted a bushbuck, item two on our agenda, which now moved up to our main priority. It’s well known that bushbuck tend to hide out during the day and start popping-up near evening. It’s also known that bushbuck love oranges and Christo had a plan. After our rest and a cold soda at camp, it was back into the truck for a half hour drive to a concession that has an orange grove on it.  Once there, we got a sneak peek at the guest facilities, which were currently being remodeled and will be especially nice upon completion.

Another half hour later and we were climbing back into the hunting vehicle. It was only thirty minutes till dark, and we began to drive a service road that bisects the tree rows, allowing us to look between the trees on both sides of our truck. I was prepped to shoot any porcupines I see. (They do considerable damage to the orange trees by chewing on the bark like a beaver. In fact, the porcupines themselves look exactly like a beaver, minus the quills of course). We saw two. The number and variety of animals we saw was surprising. There were duikers, Nyalas, porcupines, and lots of bushbuck.

Suddenly, we saw a good male. Christo said, “he’s a good one, you should take him.” and I did. It was now dark, and we had to use spotlights to find him. Not that it was difficult – he ran three rows over before piling up—only about 30 yards.  I get my first up close look at him and he’s old. He is missing some teeth, and he has the telltale ring of missing hair all the way around his neck. Obviously past his prime. Not the biggest, but a great trophy. One that I’ve wanted for some time, and now I have him. 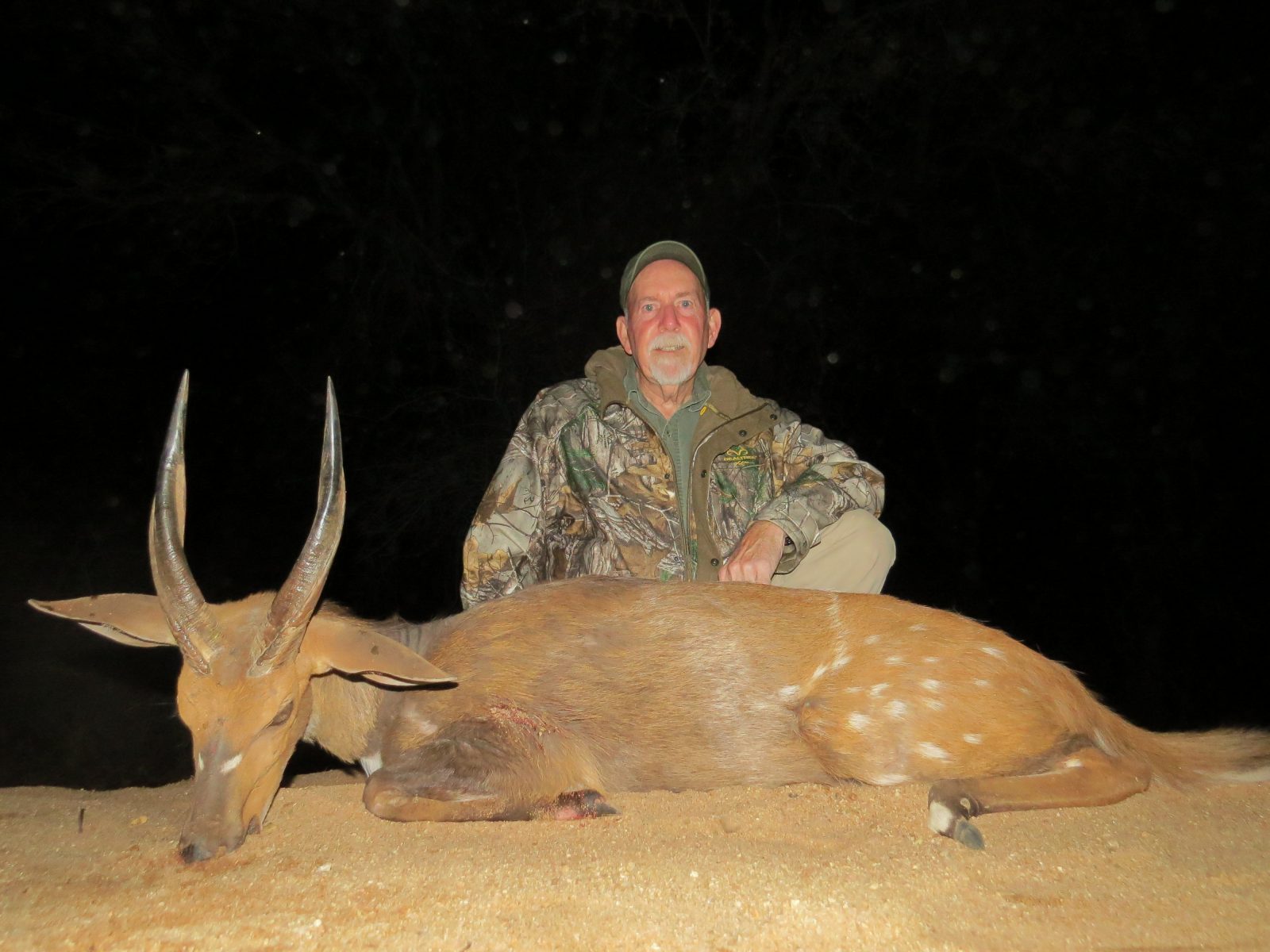 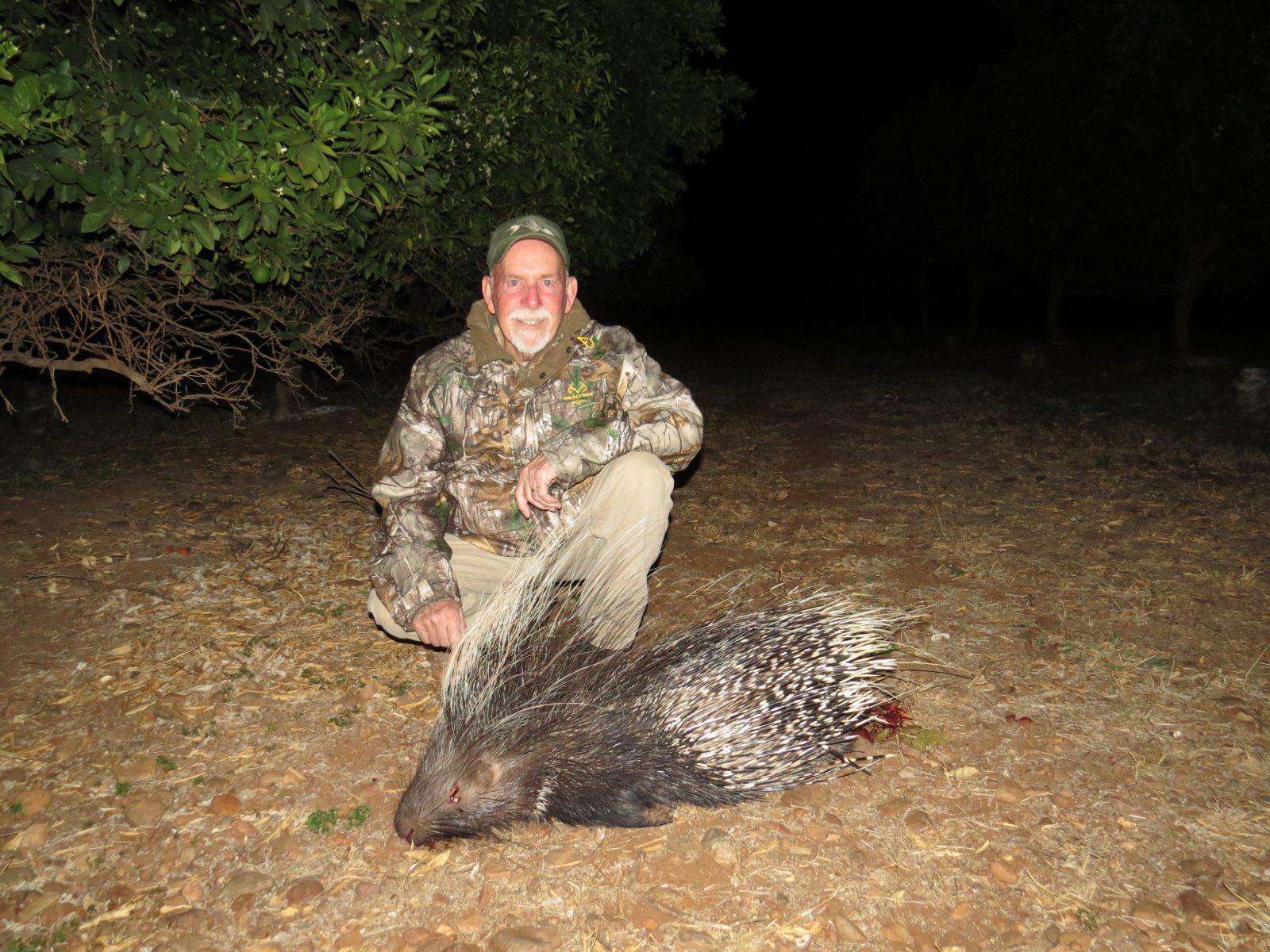